We’ve all heard it before: climate change is affecting our planet. And not in a good way.

But most of what we hear, is about how climate change will affect our atmosphere.

Read this article to learn…

A.    How ocean acidification happens

Since the industrial revolution, we have begun to burn a lot of fossil fuels. In doing so, we have released a lot of carbon dioxide (CO2) into the air.

As we mentioned earlier, we know that CO2 affects the atmosphere. But what most people don’t know, is that CO2  affects our oceans. 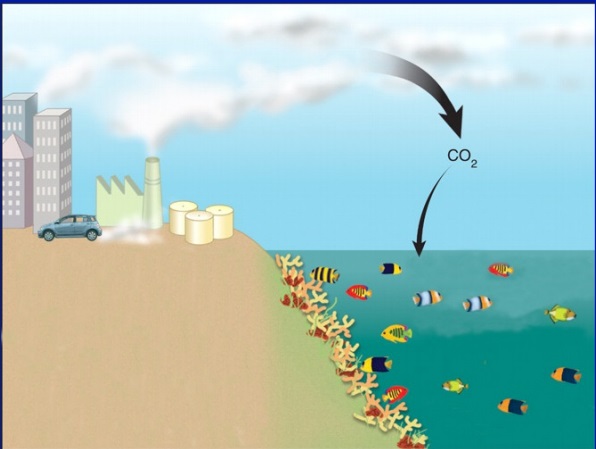 Eventually…some of that CO2 falls back down into our oceans. How much?

Our oceans have absorbed about HALF of all human-produced CO2 emissions.

When CO2 dissolves in our oceans, it increases hydrogen ions. Those hydrogen ions, then bond with carbonate ions to form carbonic acid. This leads to a lower ocean pH level.

When we pollute into the air, the ocean gets more acidic.

Take a look at the diagram below to see an illustration.

Sometimes called a “sea butterfly”, pteropods are tiny marine creatures. They’re actually about the size of a small pea.

While they may be small in stature, they are largely connected to the food web of the ocean.

Many fish, and even krill, have pteropods as part of their diet, or eat animals that eat pteropods.

Watch what happens to a pteropod’s shell after spending 45 days in sea water with a pH level of 7.8 (more on this later).

As we mentioned earlier, due to CO2 pollution, carbonate ions are bonding with hydrogen ions.

Why is this important?

Because shellfish need carbonate ions to help form their protective shells made of calcium carbonate (CaCo3).

These species are being robbed of a fundamental building block necessary to their survival.

They need to expel any excess acid. How? Through their gills, kidneys, and intestines. This process takes precious energy. Energy that could have been used to digest food or escape predators.

It also means fish sizes will get smaller. 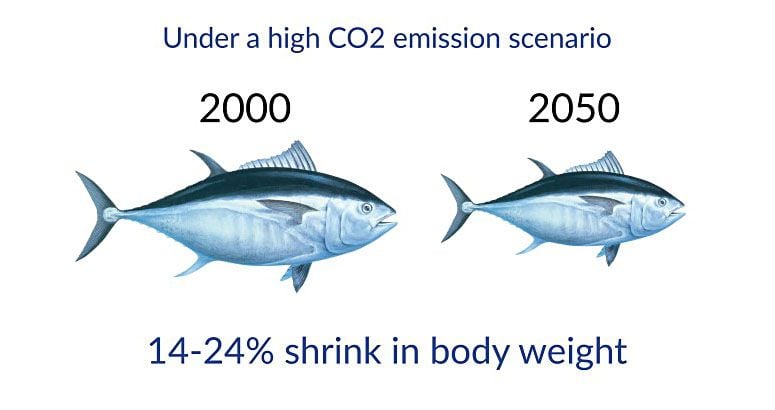 Coral reefs are also composed of calcium carbonate. They use it to build their “hard skeleton”. This is especially true in the early stages of development.

A more brittle coral reef that has trouble reproducing.

Not only can entire coral reefs die, but the organisms that depend on it as well.

These species include red snapper and grouper.

We know CO2 pollution is getting worse. This also means, our ocean’s pH level will also continue to decrease (meaning more acidic).

Remember that pteropod shell we showed you dissolving?

That was in seawater with a pH level of 7.8.

As you can see above, scientists predict our ocean will reach a pH level of 7.8 in less than a century. 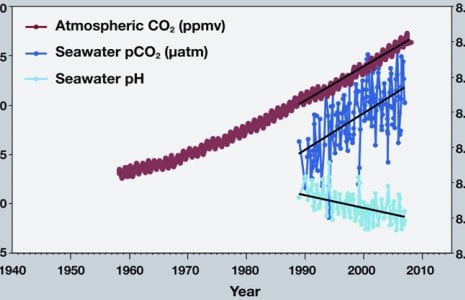 WHAT CAN YOU DO TO STOP OCEAN ACIDIFICATION?

It would be nearly impossible to stop ocean acidification.

But what we can do is, slow it down. This will give our ocean a chance to acclimate to the new pH level.

So how we slow down ocean acidification?

By weening ourselves off fossil fuels.

This concludes our article ‘Learn About 5 Scary Consequences to Ocean Acidification’. If you enjoyed, please Like or Share on Facebook! Let us know in the comments below any clever ways you have been able to shrink your carbon footprint.